I like using samba as a password-less method for people on a network to share and access files on my computer. This works well on a network you trust like a small home network or a small private network, however on different networks restricted access is preferred.

For me this problem is solved by simply having a button to turn samba on and off. This will also have the side effect that you will not be able to access anyone else’s shares but is sufficient for my needs.

Where username is replaced with your username.

The script simply checks the status of samba to see if it is running, if it is then it is killed otherwise it is started. kdialog is used to display a notification of which toggle state we are in.

We run kdialog through `sudo -u username` because when the script is run with sudo the current user will be root, and using this will cause kdialog to display an ugly notification. 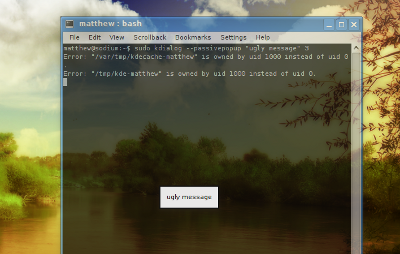 As opposed to `sudo -u username kdialog –passivepopup ‘lovly message’ 3`

Creating an icon/button (KDE)
You can then turn this into a button you can simply click my creating a desktop file. In KDE Right click > new > link to application. Then fill in the application tab with the information as in the following image: 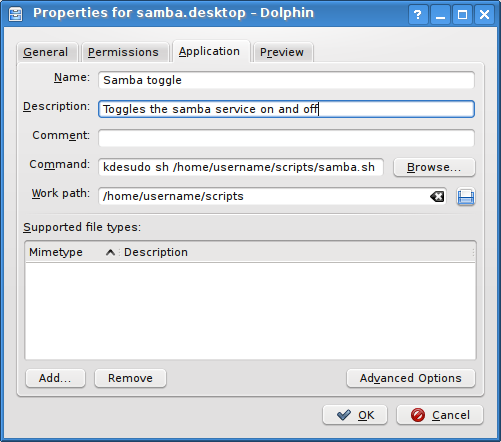 In the General tab you can give the button a name and choose the icon of your choice, click OK, and now you can drag your button to where ever you want it (taskbar, desktop, panel etc.) Then you can simple push the button to toggle samba on and off.

Utilising the notification system in KDE or Gnome in bash scripts (ubuntu 9.10 / linux)

So you want to use the nice notification features available in your desktop environment (KDE or Gnome) from a script you wrote? Below explains how to do just that for the two different environments.

The code below will use kdialog (should be installed along with kde) to create a popup message that displays for 3 seconds before closing:

A similar tool is available for gnome, but to the best of my knowledge (I don’t really use gnome) you need to install a package. The libnotify-

The command notify-send can then be used to create notifications from your script.

Where 3000 is the timeout in milliseconds (so 3 seconds). notify-send features some nice additional options such as the ability to include images eg:

The following is a simple bash script that will scan each ip address in a give subnet and report if they are alive (or accepting ping requests). The code creates processes for each ping so that it completes quickly rather than scanning each ip address sequentially.

Create a text file called “pinger.sh” and paste the following into it:

Save and close, then it can be called from the command line like so:

Flash Video (.FLV) is currently a very popular format of online videos, inparticular youtube. This post explains how to use a simple script to extract the sound from a flash video file and turn it into an mp3.

In order for the script to work you will need to download ffmpeg (to decode the video) and lame (to encode the mp3). This can be achieve in ubuntu by opening a terminal and running the following or alternatively you can use your package manager GUI to search and download the packages for you.

You then need to create a new file named “flv2mp3.sh” and paste the following into it using your preferred text editor (which hopefully isn’t VI). Save the file and then change the file permissions so that it is executable (by running:`chmod a+x flv2mp3.sh` in the terminal or via the gui in you file browser)

You should now be able to convert a flashvideo into an mp3 by running the following command (changing the filenames to fit your purpose):
sh flv2mp3.sh videofilename.flv

Extra: Youtube
In linux it might be worth noting that youtube downloads the flv’s to your /tmp folder and you can easily copy them or convert to mp3’s (Ensure video is completly finished loading).

and then run using

Of course it’s up to your moral guidance to decide what you can and can’t download.

Partitions and disk space in linux

I’m sure there are many ways to see the partitions and corresponding diskspace in linux, but here is the method I found:

I kept struggeling to remember what letters it was, as there are many two letter commands beginning with d in linux… (dc, dd, df, dh, do, dl, du). I now remember it, because ‘f’ is next to the ‘d’ key on my keyboard, and because df probably stands for disk-free.

For more information check out this site

Using the free command gives output something like this (-m just tells free to output in megabytes):

This is useful but annoying as it doesn’t show you how much memory is actually free. Files that are used are kept in the ram (referred to as caching). If the memory is needed it is simply overwritten, however if the file is used again it is already in the memory which saves time.

I wrote a quick little bash line to get the actually memory in use or the actual memory free. I use grep to select the right line from the output of free, and then use awk to do the string manipulation and math.

If you add a new repository to apt (/etc/apt/sources.list) you may get the following error when running ‘sudo apt-get update’:

Reading package lists… Done
W: There is no public key available for the following key IDs:
[Key]
W: You may want to run apt-get update to correct these problems

As you probably already guessed, running ‘sudo apt-get update’ will result in exactly the same problem. This is because the new repository’s key needs to verified. This is done by the following:

replace [Key] with the key you want to add

This can also be made slightly easier by using a bash variable:

replace [Key] with the key you want to add

or as a bash script:

ran by the following:

Script can be downloaded here

Linux has many useful command line programs that will convert from one file format to another.

Now lets look at some bash:

This is a for loop which will assign and iterate over a variable i to every item it finds that matches *.jpg in the current directory. It will simple echo the name of the file to the console and then finish. Only really useful for testing the command works, now lets put a conversion command in instead of the echo.

This will take every jpg in the current directory resize it to 500 by 500 pixels and then save it as with and x_ prefixing the filename. You can get it to overwrite the current file by making the input and output file names equal (in this case it simple means removing x_ from the above code)