Nexus Revamped Pro has just been updated to version 1.1.15 and with that come lots of exciting new features as well as many bug fixes!

Minor update to fix a few bugs and add a few more things I did have time to include in the previous update. Should also increase performance and reduce FC/OOMs

This is in addition to the other particle options (tail length and custom colors) you can now completely customise how the particles look with the new saturation settings. Some users disliked the change I made to more closely resemble the original design wallpaper by romainguy so I had added an option to choose between one like his particles (original) and like my previous particles (revived). 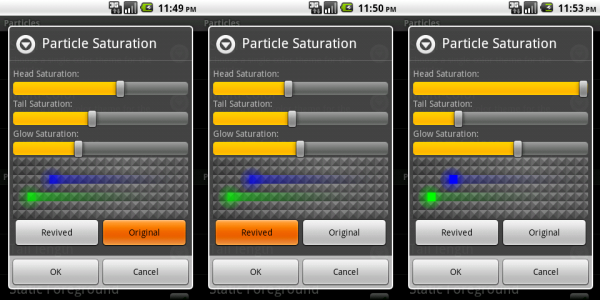 Performance
I have improved the way in which bitmaps are used which should take up far less memory. This will likely prevent the OutOfMemory errors some people were getting and remove the change of a force close. I have tinkered with a few other things which should provide better performance.

So the free version is a few versions behind the pro version and some of the fancier features are missing, I am constantly improving both so don’t worry if you don’t want to shell out Â£0.99 for an app.